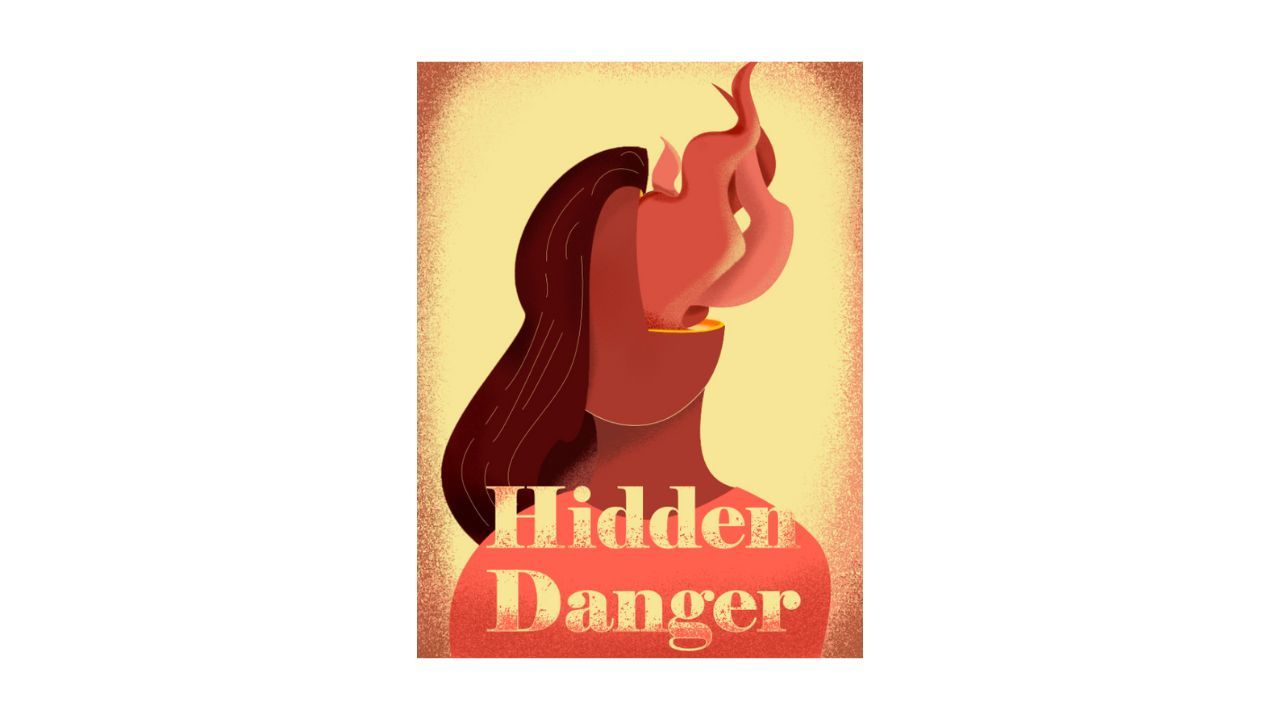 Hidden Dangers of Turning Away

Essay and artwork by a BRITE youth spokesperson.

I have never been pressured to vape before.

I am lucky enough to say that I was raised in a household where my mom was always making sure I was safe and happy. However, I know this isn’t the case for many others.

Vaping has always been a prevalent problem at my school and community. So often I would smell the scent of nicotine or marijuana in the restroom and hear rumors about the ‘dealings’ made between students that are often ignored by the student body. As a part of the student body, I admittedly have also fallen victim to ignoring these hidden acts as well, believing it to be a normal part of high school life.

However, one specific encounter with vaping stayed with me. I was surfing around YouTube, clicked on a new video, and I was interrupted by something I’d never forget: an advertisement.

It wasn’t just your average ad, but a brief video of two girls hanging out and doing homework. In the video, the two girls were talking casually. One girl handed her friend a flash drive and went on doing her work. Seems normal, right?

Yet what was revealed later was that the flash drive was a disguised electronic cigarette, or more commonly known as a vape. In the end, the girl inhaled the disguised e-cigarette and described the flavor as ‘fruity.’

The reveal in that ad shocked me. There were absolutely no signs of the e-cigarette, because to a normal viewer, the first few minutes of that ad were just two girls doing homework after school.

Despite the ad being just a few minutes, it left a profound impression on me. The ad was such a shock because I had never really been exposed to learning about vaping or the struggle that others go through because of vaping.

So if you are like me, someone that has been fortunate enough to not think about this problem, it might be time for us to start.

To begin, some might wonder: why do teens start vaping?

According to the U.S. Department of Health & Human Services, there are a multitude of factors that lead adolescents to smoke or use tobacco or marijuana, including stress and low self-esteem, to having parents, siblings, or friends that smoke. Oftentimes the social characteristics that teens are exposed to lead them to this issue.

It also does not stop there, as people who vape have the potential to get addicted due to a key ingredient in vapes: nicotine or THC (the chemical behind marijuana’s high).

Nicotine and THC are both highly addictive chemicals and are very dangerous to those under 25 because the human brain has not been fully developed. According to Yale Medicine, adolescents are easily influenced by chemicals like nicotine or THC due to the brain’s reward system, called the mesolimbic dopamine system. This system is developed as a positive reinforcement mechanism to make sense of behavior that is meant for survival, like eating, sleeping, etc. Once nicotine or THC is absorbed into the lungs, it also reaches the brain and sends signals to release dopamine, which makes people feel good. So, the brain is technically being trained to recognize that consuming nicotine or THC is good for you, causing you to crave more.

Despite all of this evidence, we have to ask this question: do people who vape not know of the risks?

With the internet being full of information about the dangers of vaping and schools educating students with their yearly Red Ribbon Week campaign, I would say teens are by no means unaware of the dangers of nicotine and other consumable chemicals like marijuana. However, just because they know how negatively it will affect them, does not mean they still won’t do it.

Teens, by nature, are defiant, stubborn, and sensitive. We’re at an age where things are constantly changing and stress begins accumulating both from school and our social lives. Especially when the pressure is at its peak, some might go for short-term solutions that offer instant relief.

While there are different reasons and experiences for each individual, I believe it is important to address how we approach this problem. There is no point in trying to ‘scare’ someone out of vaping by teaching facts and judging their decisions. Unfortunately, it is because of this expectation that some teens would never dare ask for help.

Ultimately, what exactly can we do to help?

Although we can easily dismiss an adolescent’s behavior by saying, ‘that is just how teens are,’ it is a major drawback in society to be desensitized to this issue. Yes, rebellious behavior is a trait in youth; however, there is a lot we can do to prevent it just by being present and there for them when they are at an age of uncertainty.

Like in the YouTube ad, you can’t tell who vapes just by looking at them, and similarly, you also can’t really see their struggles.

So, maybe the first step to helping someone is just to take a step: listen, learn, and understand them.

Overall, even though this information is just scratching the surface of a complex issue, I hope people like me that might not fully understand it can start to become more aware of what our youth today are going through.

We can eventually make this world a better place, but let’s at least make it a decent one first.

To find out more about vaping and marijuana, visit Marijuana FactCheck and Vaping FactCheck.