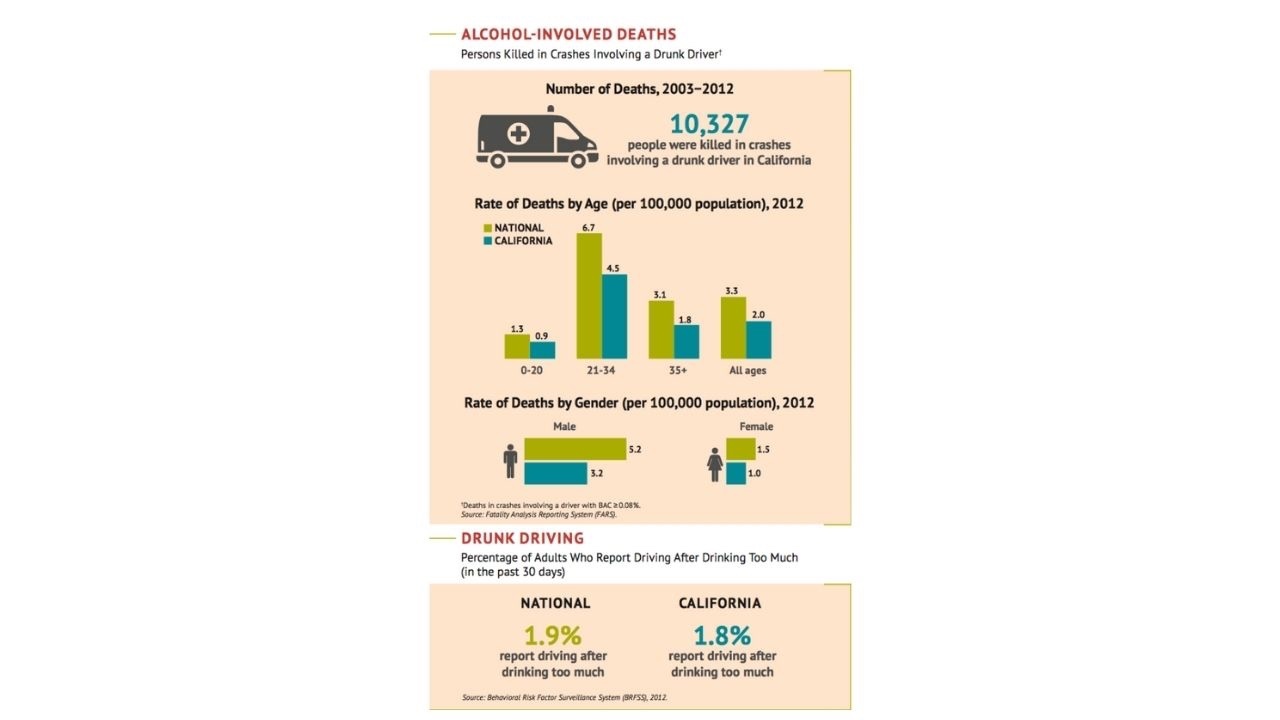 Impaired Driving in California: Fast Facts and How to Prevent Teen Car Crashes

54% - The percentage of teens in high school who drink and drive has decreased by more than half since 1991.

17x - Young drivers (ages 16-20) are 17 times more likely to die in a crash when they have a blood alcohol concentration of .08% than when they have not been drinking.

The percentage of teens in high school who drink and drive has decreased by more than half since 1991,* but more can be done. Nearly one million high school teens drank alcohol and got behind the wheel in 2011. Teen drivers are 3 times more likely than more experienced drivers to be in a fatal crash. Drinking any alcohol greatly increases this risk for teens.

Research has shown that factors that help to keep teens safe include parental involvement, minimum legal drinking age and zero tolerance laws, and graduated driver licensing systems. These proven steps can protect the lives of more young drivers and everyone who shares the road with them.

*High school students aged 16 years and older who, when surveyed, said they had driven a vehicle one or more times during the past 30 days when they had been drinking alcohol.

Drinking and driving can be deadly, especially for teens

Fewer teens are drinking and driving, but this risky behavior is still a major threat.

The strategies in this section are effective for reducing or preventing drunk driving. They are recommended by The Guide to Community Preventive Services and/or have been demonstrated to be effective in reviews by the National Highway Traffic Safety Administration.* Different strategies may require different resources for implementation or have different levels of impact. Find strategies that are right for your state.

Drunk driving laws make it illegal nationwide to drive with a BAC at or above 0.08%. For people under 21, “zero tolerance” laws make it illegal to drive with any measurable amount of alcohol in their system. These laws, along with laws that maintain the minimum legal drinking age at 21, are in place in all 50 states and the District of Columbia, and have had a clear effect on highway safety, saving tens of thousands of lives since their implementation.

Sobriety checkpoints allow police to briefly stop vehicles at specific, highly visible locations to see if the driver is impaired. Police may stop all or a certain portion of drivers. Breath tests may be given if police have a reason to suspect the driver is intoxicated.

Ignition interlocks installed in cars measure alcohol on the driver’s breath. Interlocks keep the car from starting if the driver has a BAC above a certain level, usually 0.02%. They’re used for people convicted of drunk driving and are highly effective at preventing repeat offenses while installed. Mandating interlocks for all offenders, including rst-time offenders, will have the greatest impact.

Multi-component interventions combine several programs or policies to prevent drunk driving. The key to these comprehensive efforts is community mobilization by involving coalitions or task forces in design and implementation.

Mass media campaigns spread messages about the physical dangers and legal consequences of drunk driving. They persuade people not to drink and drive and encourage them to keep other drivers from doing so. Campaigns are most effective when supporting other impaired driving prevention strategies.

Administrative license revocation or suspension laws allow police to take away the license of a driver who tests at or above the legal BAC limit or who refuses testing. States decide how long to suspend the license; a minimum of 90 days is effective.

Alcohol screening and brief interventions take advantage of “teachable moments” to identify people at risk for alcohol problems and get them treatment as needed. This combined strategy, which can be delivered in health care, university, and other settings, helps change behavior and reduces alcohol-impaired crashes and injuries.

School-based instructional programs are effective at teaching teens not to ride with drunk drivers. More evidence is needed to see if these programs can also reduce drunk driving and related crashes.

What Can Be Done

States and communities can:

Pediatricians and other health professionals can: