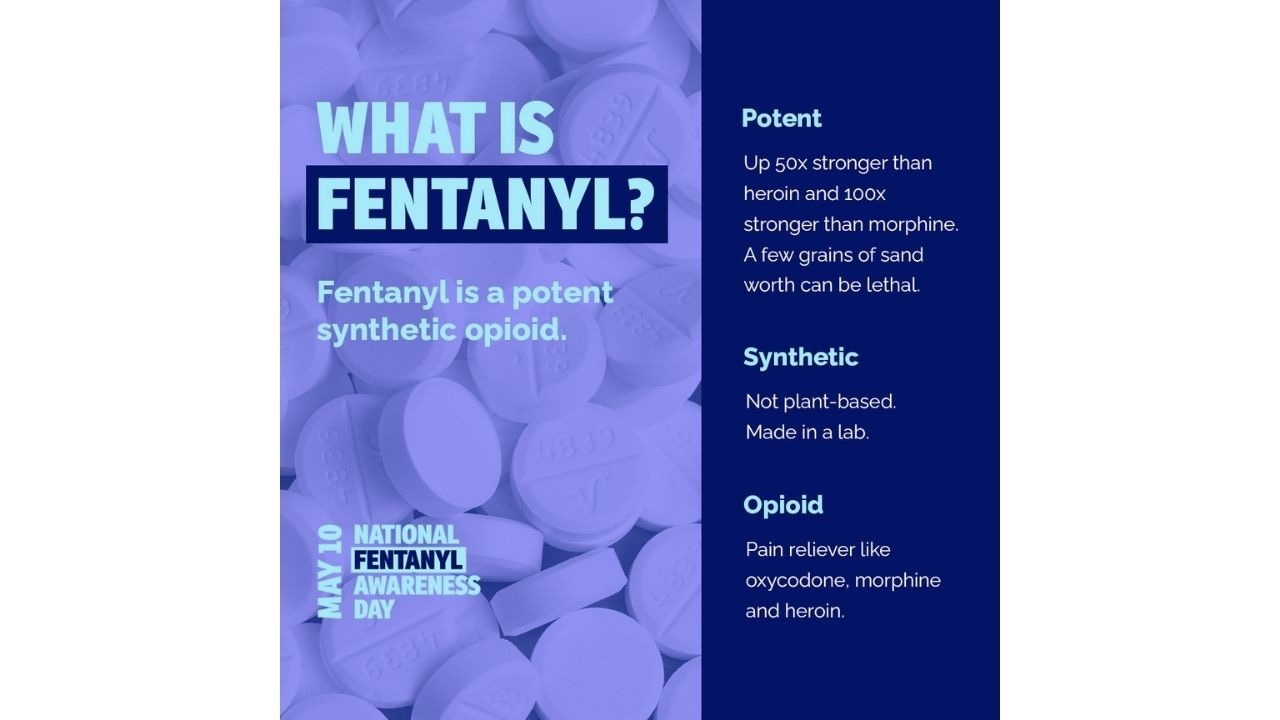 The first National Fentanyl Awareness Day was May 10, 2022, and was recognized by organizations across the U.S. including the DEA. It was created to address our national public health crisis of deaths and overdoses due to fentanyl use. People, especially young people, are ingesting illegally manufactured fentanyl without knowing it and dying at alarming rates as a result.

The statistics are staggering. Fentanyl is involved in more American youth drug deaths than heroin, meth, cocaine, benzos, and Rx drugs combined. Fentanyl is odorless, tasteless, cheap and extremely potent. It is often found in fake pills disguised as Oxycontin, Percocet, Xanax and Vicodin, which can be deadly. This is why it's important to learn the facts about fentanyl and share them with your friends and family.

Fentanyl is very cheap and extremely addictive. Drug dealers are mixing illegally-made fentanyl w​​ith and disguising it as other common drugs to increase their profits. This process is not regulated and does not undergo any kind of quality control like the medication you would get at a pharmacy. Drug users have no way of knowing what they are getting in illegally-purchased drugs, and as little as two milligrams of fentanyl (two grains of sand) can kill a person.

Illegally made fentanyl and its dangers, while well-documented by health professionals and law enforcement, are largely unknown to the general population and even more so to its most vulnerable population: youth and young adults. According to the CDC, fentanyl is involved in more deaths of Americans under 50 than any other cause of death, including heart disease, cancer, and all other accidents. Among teenagers, overdose deaths linked to synthetic opioids like fentanyl tripled in the past two years, yet 73% have never heard of fake prescription pills being made with fentanyl.

Fentanyl is everywhere: an estimated 250-500 million pills made with fentanyl are in circulation in the U.S. at any time. This doesn’t even account for powder drugs made with fentanyl such as cocaine, MDMA (molly/ecstasy), or heroin. The practice of cutting drugs with fentanyl is relatively new, so public awareness is low. Educating the public and our communities about this crisis is the first step to reversing the tragic outcomes.

Parents, it's important to talk to your kids about the risks of encountering illegally made fentanyl. We know it can feel uncomfortable to bring up challenging or scary topics with your kids, but it is crucial to have these important conversations and to educate each other to prevent more tragic overdoses and deaths. As unimaginable as it might seem, your kids might be offered a pill at a party, or even at school, without knowing if it was illegally manufactured, and two grains of fentanyl is enough to be deadly and cause an overdose.

Here are some helpful resources to learn more about fentanyl and what you can do to prevent deaths and overdoses in your community.